Leading organisations recognise the design of the offices is crucial for reaching business goals. An innovative workspace can improve performance, foster health and well-being and mould company cultures.

A mountain of research has revealed stark evidence about the negative effects of open-plan offices. Consequently, an evolution of new office design trends has emerged in recent years.

The ideals of a trendy millennial workforce – now a larger population than Baby Boomers – are also driving the office design upheaval. One survey reveals 54% of millennials in the workforce consider the office setting as an important factor when deciding whether or not to accept a job offer.

One of the challenges companies face today is recruiting the best talent. The next challenge is to retain them by keeping them motivated. The modern workforce is less motivated by salary. They want job satisfaction. 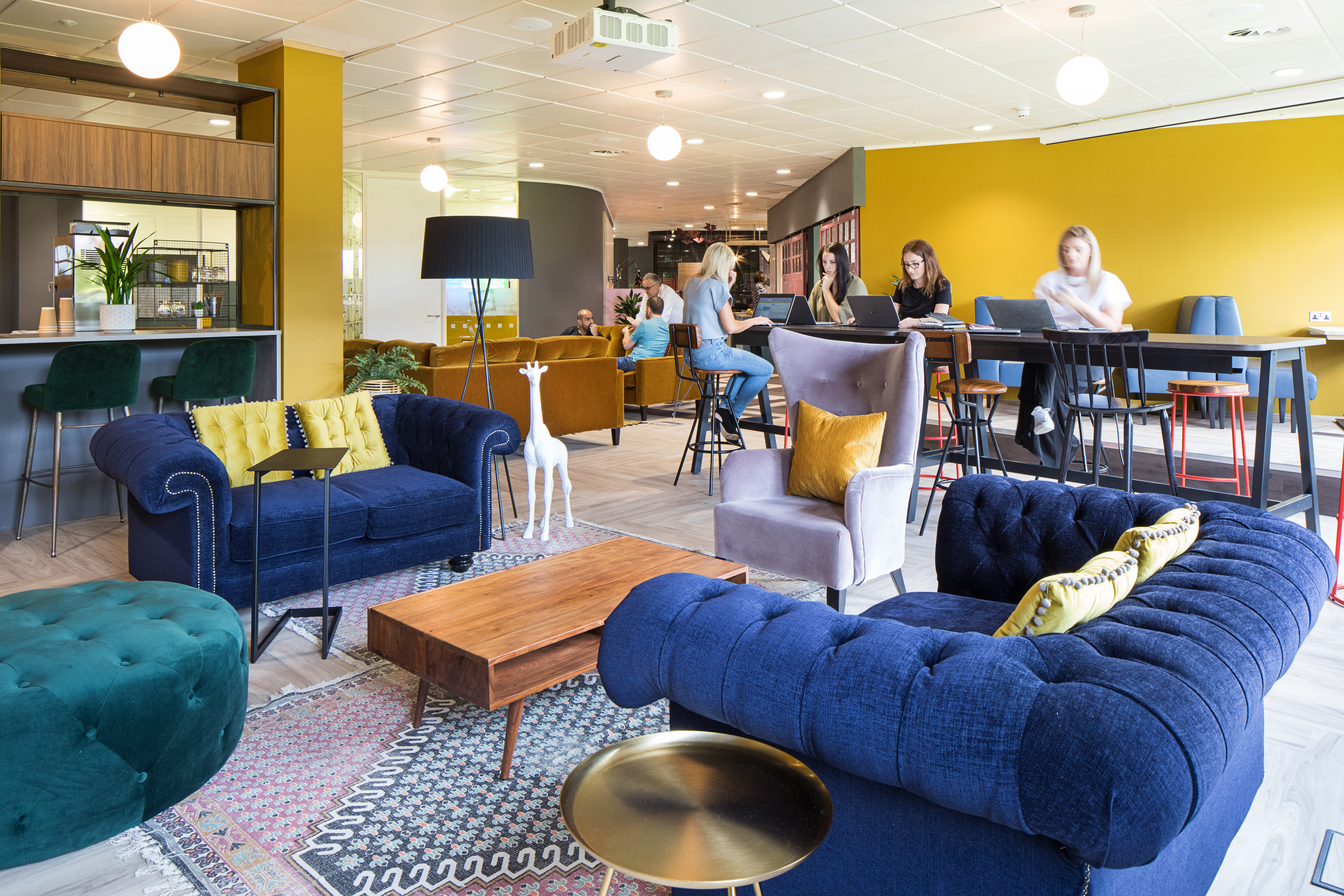 Understanding the impact your office environment has on your employees is crucial. It’s worth noting the modern workforce is clued up about the detrimental effects of sedentary work and expect employees to consider health and wellbeing in a variety of ways.

The workplace has a significant impact on physical and mental health, and cognitive ability. In return, there is a knock-on effect on the quality of output, productivity, job satisfaction and absentee numbers.

When Clive Wilkinson redesigned Google’s Mountain View offices in California, the architect said the attitude in the boardroom of the tech behemoths was “We’re inventing a new world, why do we need the old world?”.

That was back in 2005. Wilkinson’s answer was an open-plan office – and, of course, everybody wanted to remodel their own office layout to “be like Google”.

Like a 21st-Century Jericho, the walls came tumbling down and private offices were abolished. Senior executives sat among their charges. This would enforce the idea that some people are not better than others and cultivate a company culture of ‘togetherness’.

The concentration of employees was meant to fuel the energy of the workplace and the workforce in a healthy hive of activity deliver unprecedented peaks in productivity.

The reality of the open-plan office is they are noisy, distracting, and overload the senses. It turns out the human brain is not efficient when multitasking. Even the smallest distraction can pull an employee from ‘the zone’ and cause them to lose focus for the next 20 minutes.

Noise is the biggest distraction for professionals. Researchers at the University of Sydney discovered half the workforce in an open-plan office is distracted by sounds compared to 16% of people that work in private office space.

Other studies have shown that people working in open offices are ill two-thirds more often than employees that work in their own space. It is estimated that £30 billion is lost every year in the UK due to low productivity, recruitment and absenteeism linked to poor building design.

Oh, and on other thing; employees hate open offices.

There are 20 million workers in the UK that spend an average of 37 hours in an open-plan office. When you hear their feedback, open-plan offices are not the “new world” Google execs had hoped to create back in 2005.

Fast-forward fifteen years and interior office designers are having a major rethink.

Design concepts are moving swiftly. As we venture knee-deep into the digital age, office designs are being shaped around the technological revolution and the demands of the dominant workforce – millennials.

The three C’s are a priority in modern office designs; collaboration, connectivity and concentration.

Company bosses naturally want productive work environments. However, they are also conscious about the need to promote employee satisfaction – or face the backlash of millennials that have grown wise to the myths told by earlier generations.

“Flexible” or “agile” offices have, thus far, been the answer to businesses that require flow and fluidity. The new approach has been to design holistic work settings that appeal to various personality types and workplace needs.

The blueprint of the open-plan is still being used as a basis. The feeling is that everyone needs some time together to bond, collaborate and champion a company culture.

Agile offices are designed to encourage workers to choose where they work. “Smart” offices even choose where workers should work by selecting a desk for them based on their work schedule for the day.

This idea is supposed to reflect a shift in mindset the deposes of a hierarchy in favour of a community.

It is also believed a change of scenery and the opportunity to mingle with colleagues from other departments will support innovation. However, encouraging employees to move desks every day is not so smart.

Research in the field of neuroscience also provides insights to suggest that working in open-plan offices can affect cognitive functions such as attention, memory and planning.

These faculties share the same neural connections and synaptic inputs (‘wetware’). When the sensory perceptions are overloaded, our quality of thinking suffers. The same is true if we change desks too often. We retain more information if we stay in the same spot.

To promote innovation in the workplace, innovative office designers came up with the concept of ‘recreational areas’ or a place where people can socialise.

We’re now starting to see a higher rate of demand for pool tables, ping-pong or other casual sports that enable employees to take a break and socialise. Cafes, bars and lounge areas are becoming increasingly popular.

Whilst it makes sense for businesses to maximise collaboration, congregating staff together impacts concentration levels and the ability to think deeply.

The knock-on effect is that productivity and innovation can suffer. Research published by Steelcase reveals employees yearn for distraction-free zones where they can spend time alone for in-depth contemplation.

What’s more, people report feeling more stressed in a crowded and noisy work environment because they are falling behind on their targets. Many employees are saying they long for a closed office lifestyle.

Consequently, company bosses are reluctant to re-erect walls and return to segregation so soon. However, firms that employ staff that require focus such as writing, financial planning, design, programming and report writing are experimenting with quiet areas that have private rooms or individual niches.

However, timid employees can find themselves in a conflict – with themselves. Whilst the company culture is centred around collaboration and interaction, introverted individuals don’t feel comfortable leaving the team to sit on their own.

The privacy crisis can be resolved by creating a variety of private spaces. Acoustic privacy silences the noise but open glass windows enables employees to see and be seen whilst visual privacy eliminates all manner of distractions and keeps conversations and content confidential.

Almost every company will have a workforce that has differing personality types. A report published in the Harvard Business Review indicates that some people work better in conditions that are aligned with their personality.

“Talent is mainly personality in the right place, which explains why most people will do better in some jobs, cultures, and contexts than in others.”

Personality types complicate office designs. There can be no ‘one-size-fits-all’ approach. The psychological aspects of a workplace design influence spatial perception and impacts ‘wetware’ cognitive processes that are critical for job performance.

A consistent behavior is for workers to gravitate towards workstations that are best suited to the work they are undertaking.

This has led interior office designs to create diverse areas that accommodate a variety of personality types to do their work, together with recreational spaces that appeal to a certain character. 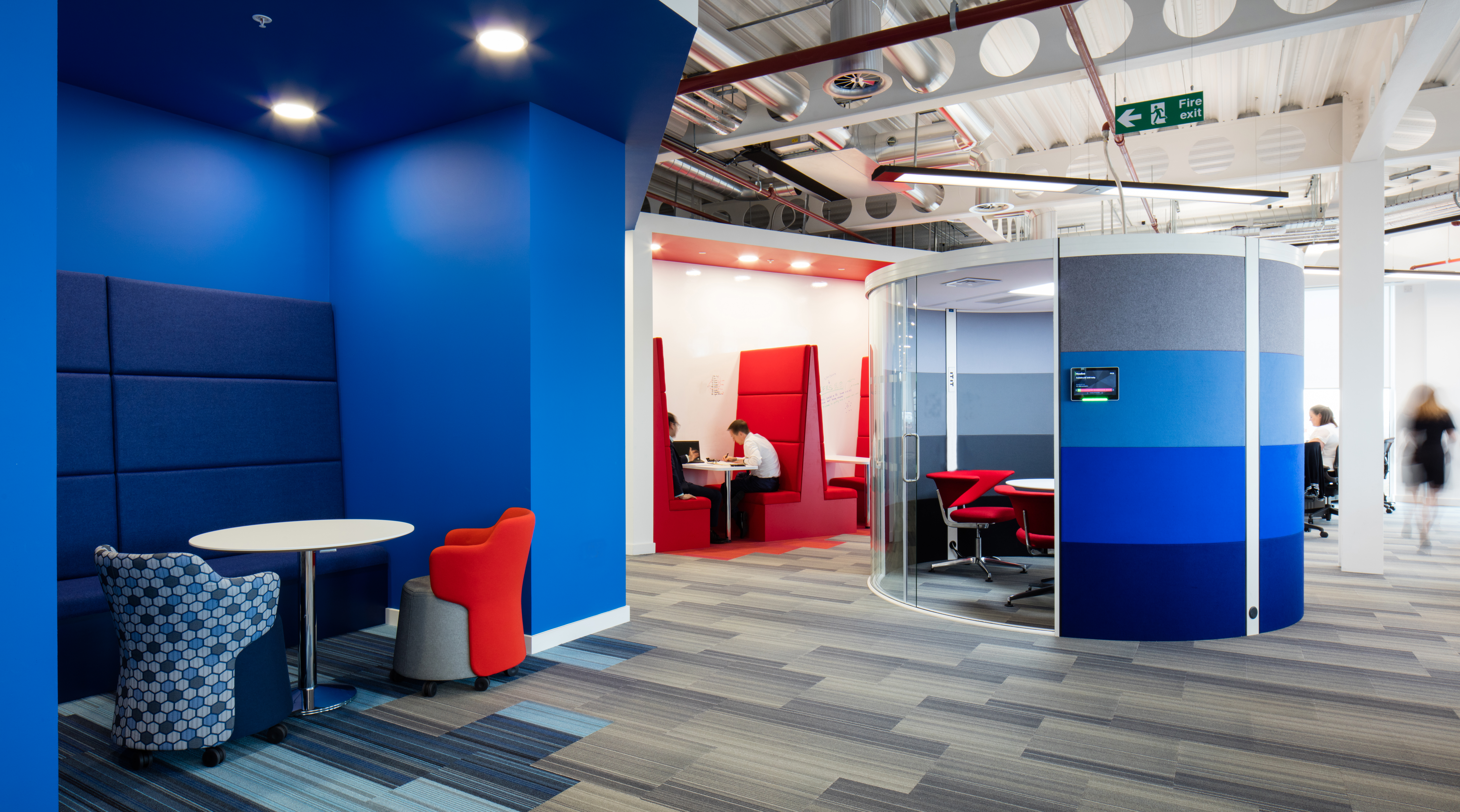 Introverts, for example, like quiet spaces where they can think, rejuvenate and refresh. Green spaces such as rooftop gardens or quads are favourable. Meditation rooms and small, cosy lounges that are not hyper-social also allow introverts the opportunity to escape noisy offices.

To create a balanced workplace, social areas provide extroverts with the space to re-energise by interacting with colleagues. Recreational areas are designed to stimulate the brain whilst an in-house bar that opens after working hours and during lunch encourages social gatherings in a relaxed setting.

A common feature in modern ‘agile’ offices is for employees to float around the office and work from various workstations. Mobile working does not sit comfortably with traditionalist personality types, however.

Traditionalists prefer dedicated desks they can call their own. Being around familiar surroundings helps some people feel more relaxed and focused.

A permanent place also means they can display family photos, use their personal coffee mug – and they know where the stationery is. Traditionalists tend to be more organised and set in their ways, and thus productive.

Meanwhile, mobile workers appreciate the option to move around the office. A change of scenery can be refreshing and inspirational for this personality type.

Physiological studies have shown standing for at least 30-minutes a day can improve the musculoskeletal structure, although researchers have only scratched the surface of their investigations and there are two schools of thought as to whether standing has any long-term physiological benefits.

Regardless of scientific debate, corporate bosses, and interior designers, feel it is best practice to give people the option. Sit-stand desks (SSD) are becoming increasingly popular in offices although mobile workers have also shown a penchant for the lounge posture in comfort zones.

Is A Flexible Office Design Right For Your Business?

It’s not yet clear whether flexible working and agile office designs will resolve the issues that are evident in open-plan offices. The advantages are expected to prompt a 30% growth year-on-year.

In many ways, office designs tie in to the company culture. It makes sense to create appropriate workspace centred around specific tasks and the preferences of your staff. It’s also advisable to promote private offices and dedicated desks.

Regardless of the office layout you choose, it’s important for the design to strike a balance so that every member of staff can produce their best work. Agile office designs do have the potential to improve collaboration, productivity and nurture job satisfaction, health and wellbeing. It’s how you use the space that matters.