Part of the Inspired Entertainment corporation, UK-based Inspired Gaming offers a rapidly expanding portfolio of content and products, supplying gaming machines to betting shops, pubs and other establishments. The company wanted to consolidate its property portfolio and create a UK headquarters, bringing together a mix of departments and teams, complete with micro cultures and characters, from five existing offices around the country to one central location.

The old brewery building at 107 Station Street is a landmark in Burton-on-Trent thanks largely to its cathedral like scale. With listed status and an imposing exterior façade, it’s an iconic, industrial building that fitted with the destination, flagship workplace that Inspired was keen to create. 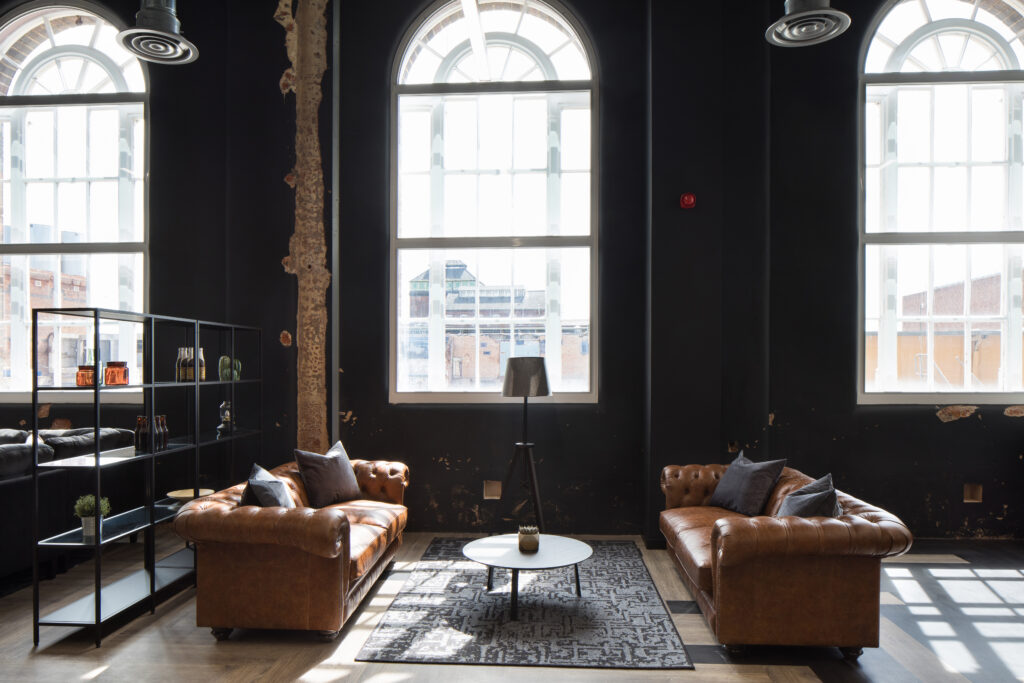 The building’s epic proportions – over one hundred metres long and a ceiling height of six metres – means that it stands out in all its worn, historic glory. The intention was to retain the essence of the past and the authenticity of the place, preserving elements of the degradation of this beautiful, imperfect building, while juxtaposing this concept with a clean, highly technological installation for Inspired.

Our starting point was to get to know the client’s business and its core values to obtain direction, influence and inspiration. We wanted to provide them with a functional and contemporary design that resonated with, and reflected, not just who they are but also how they wish to be perceived. Given that, we were working with an open brief and the understanding that we were there to help to take them through to the next stage as a company.

The canvas was certainly dramatic – a single storey space with standout, vast dimensions, massive ceiling heights, approximately 90 windows, imposing architecture and a listed façade. We didn’t want to detract from the original architecture and were keen to protect the imperfections in the walls and to keep the history of the building, and those who had passed through it over the years, intact.

Adhering to this basic rule, ceilings were kept exposed and the original structural steels became a main feature, sprayed black to effect a modern industrial feel.

High level mechanical and electrical services were installed and left on display, including a full HVAC system. Air bricks were opened above each window to provide extraction and ventilation for the mechanical system and to allow the movement of fresh air. There was a lot of design and testing up front to ensure correct air flows and secondary glazing was fitted to all the windows throughout.

Additional structural steels were required around the lift shaft and from the first to the second floor. Partitions were installed to create office spaces in the large open area and a new fire escape was installed along with fire compartmentations to raise occupancy levels. We also design and installed a staircase and fitted double glazed partitions with various manifestations and floor coverings throughout. A reclaimed raised access floor covers the majority of the surface area. 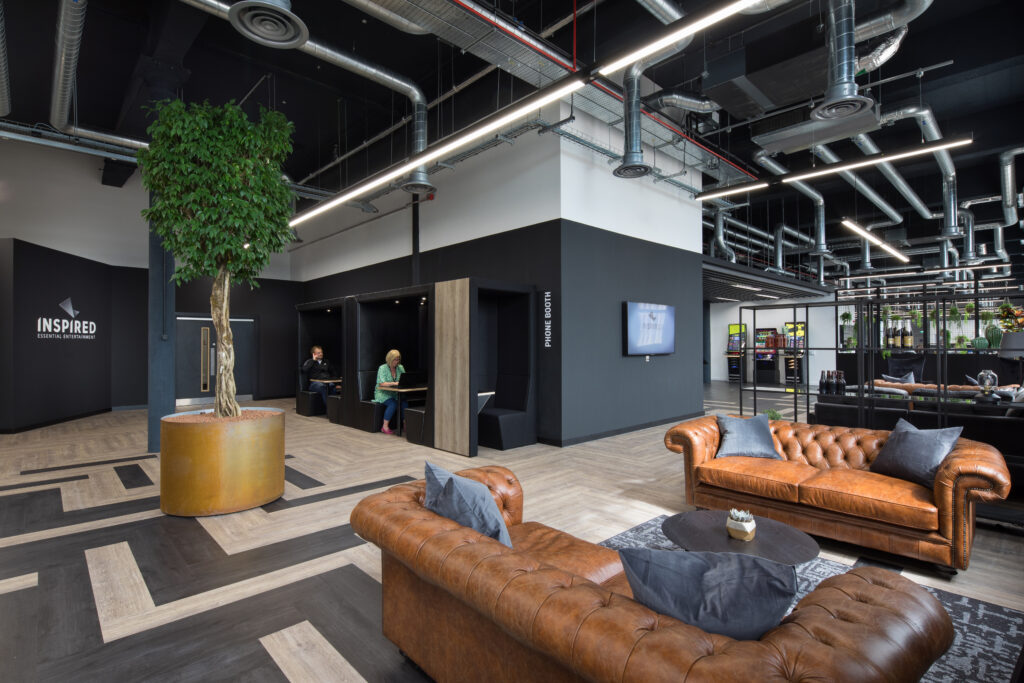 A comprehensive IT infrastructure was completed to include a central data room with emergency recovery installation, battery and generator backups.

It was important that the space was adaptable and so we introduced a lego style in terms of desks and lighting; a plug and play workspace so that Inspired will ultimately be able to chop and change the layout of the desks themselves, giving them a sense of autonomy and ownership. This space can morph and change, rotate and swop, moving forward. It’s a space that can be edited to allow a change in focus as required.

Led by the prospect of pursuing a sense of family and oneness to unite them and bring the disperse teams together, we designed a heart within the building where you enter to make a cup of tea, have your lunch and to socialise with each other. In short, this heart is a place to live, be nourished, find community and play. It provides a solid core.

We allowed ourselves to be influenced by the blade brand logo, carving the space up at random angles to create interesting, dynamic forms. The project demonstrates a sustainable element due to the reuse of much of the existing furniture from the previous offices and the reuse of the building itself with careful use of materials. 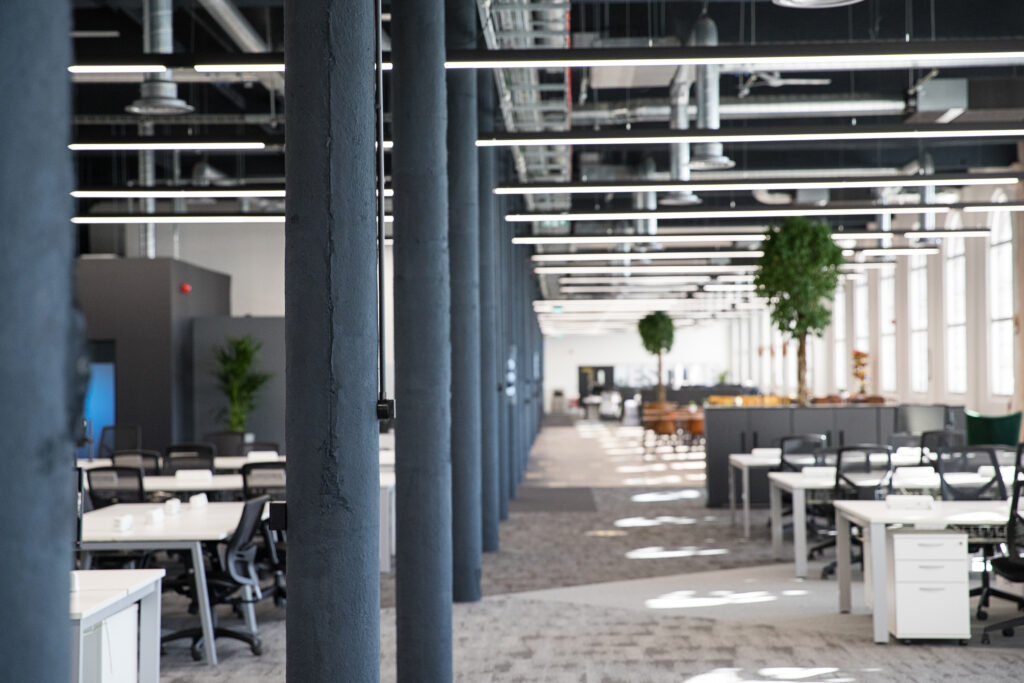 There’s a distinctive look about these headquarters, with a symmetry of lines that is consistent throughout the space. The core brand palette has a monochrome baseline with three or four primary brand colours. Inspired initially wanted us to use all the colours associated with the brand but we wanted to create a blank canvass; one in which their products, games and machines could sing within the space. We also didn’t want to take away from the architecture of the building itself.

We worked closely with the US team to develop brand lines including #now we play which is currently being used by Inspired at events and exhibitions and across its website.

The overall concept proposal Office Principles delivered was a balance of what could be considered professional and edgy, rethinking the traditional Inspired workplace, enhancing the culture and reflecting the core principles and values of the business.

There is an equal mix of ‘we’ and ‘me’ as this new collaborative, shared space also recognises the need for solitude. We created balance and openness to support the different energies coming together for the first time and to provide a universal channel for those energies. 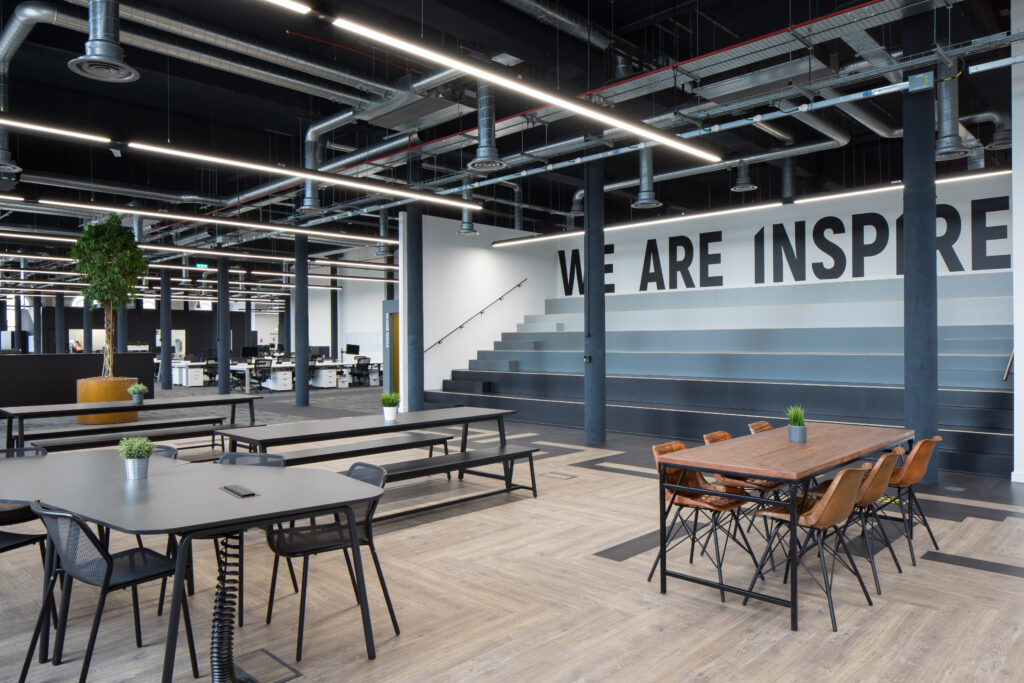 There were lots of challenges to navigate from the outset however Inspired had chosen an amazing address and we were determined to honour this great building, focusing on making it the best and most fitting work environment that would excite its occupants and pull the team together as one. We’re really proud of what we’ve achieved with, and for, Inspired and are very happy to have played a part in this project.

We wanted a cool, retro environment that our staff would feel comfortable in - not just an office space. Office Principles really helped us to figure that part out. We chose a building that was extremely old and difficult to refit. Office Principles got on board with our design concepts, right from the beginning, and helped turn our vision into a reality, giving us an amazing place to work. The office makes a real statement about us which we couldn’t have achieved without the expert knowledge and guidance of Office Principles.