Recently one of the designers of our office interior design team here at Office Principles, Steve Cooper, took part in a charity cycle ride from Blackheath (South East London) to Paris. Steve cycled for the CHOC Childhood Cancer Foundation SA and you can still donate on his JustGiving page. We caught up with Steve for an interview to hear what he had to say about the ride…

How long did you train for the cycle ride?

Training started in February with a couple of short midweek rides (15-20 miles) and a big ride over the weekend (20-30 miles). Over the next few months I worked up to 3 rides during the week (20-30 miles) and a big ride (80-100 miles) over the weekend. As well as the training I also completed a few sportives including the Exmoor Beauty (60 miles and over 5,000 feet elevation) and The Wheels Heroes ride (100 miles) in Stratford. 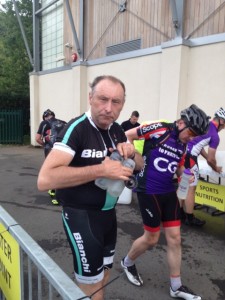 How long did the route take you to complete?

The idea behind the London to Paris ride was to get to Paris within 24 hours; however the head wind this year was so bad that only 8 riders out of the 283 completed the whole route within 24 hours. I managed to do it in 28 hours 3 minutes but missed out a stage.

How far was the route from Blackheath to Paris?

The route was broken into 8 stages totaling 280 miles. At each stage there was the option to take a coach to the next stage. I missed out stage 6 and therefore only cycled 239 miles. As well as the head wind we had a heavy downpour on stage 7 and I got soaked through. We didn’t have any dry clothing so for the 8th and final stage one of our team had the idea of putting the silver foil blankets under our jerseys to keep the heat in. This acted like a wetsuit and kept us warm all the way to the end.

Did anything funny or interesting happen during your journey?

It was quite bizarre to see 283 riders and their bikes on the ferry from Dover to Calais. On the upper decks a few people caught up on some sleep, literally crashing out on the restaurant floor. My team commandeered a table and chairs. We tried to get some sleep but we were still too excited and there was too much noise. However we did get some funny looks from the other passengers when we proceeded to prepare for the night ride in France by putting leg warmers, arm warmers, head torches and high visibility jackets over our Lycra.

How many other cyclists took part?

There were 283 riders in total. 78 riders failed to finish because of the weather. 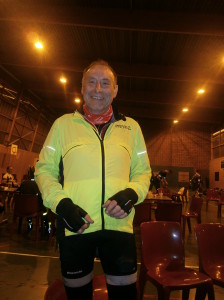 What was the most/least enjoyable part of the journey?

I really enjoyed riding through the night in France as it was so quiet and there was very little traffic on the roads. There were plenty of people on route in the UK supporting us, but I was surprised by the number of people in France who came out in the middle of the night to cheer us on. The best bit was riding around the Arc de Triomphe and up the Champs Elysee. This was the same route the Tour de France would take a few weeks later. The worst part was at the feed station after stage 7. Being wet on the bike wasn’t an issue but as soon as I stopped I got very cold and couldn’t stop shaking. It took a while to get warm again.

Have you cycled cross-country before? If so, where?

I have only being cycling properly for 2 years and this was the longest ride I have attempted. The sense of achievement and comradery was fantastic.

What is your next adventure?

In November I will be taking part in the Momentum 94.7 Cycle Challenge around Johannesburg. This is only 60 miles and 4,800 feet of climbing; however at over 3,000 feet above sea level I think this challenge will be different. Once again this is for the charity CHOC Childhood Cancer Foundation SA.

What an amazing achievement! We wish you the best of luck in the Cycle Challenge around Johannesburg. If you would like to donate to CHOC, please do so through Steve’s JustGiving page.

Follow Luke Roberston for the latest in Office Principles news.

An Accessible Office: Disability in the Workplace & The DDA Act

A Guide to Inclusive Office Design – Celebrating Diversity in the Workplace