The Role of Biophilic Design in the Office Environment

As the office evolves and we take on a more people-focused approach to its design, we’re increasingly turning to biophilic references and styles in order to create the most desirable working environments; work spaces that will bring workers in to the office and help them to engage with each other and their surrounds.

So where does this practice originate?

Professor of social ecology and one of the pioneering theorists on the impact of biophilic design, Stephen Kellert identified biophilia, in a paper he co-wrote with Elizabeth Calabrese on ‘The Practice of Biophilic Design’, as “the inherent human inclination to affiliate with nature that even in the modern world continues to be critical to people’s physical and mental health and wellbeing.” 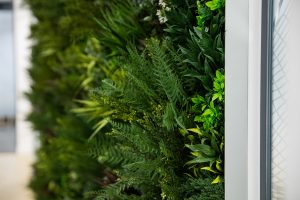 Biophilic design, in the commercial world, is rooted in the consideration of the office as a community; the intention being to create workspaces that support social integration and communal wellbeing.

As a style of design, it is fast gaining traction, with architects and designers starting to view it as an integral part of any commercial and public building blueprint.

The term ‘biophilia’ was initially coined by psychologist Eric Fromm in 1964 and is a reference to the human need and desire to connect to nature.

The recognition of this connection as a vital aspect of the restoration, and maintenance, of health and wellbeing, can be evidenced as far back as the Victorian times, when seaside resorts gained popularity as a means to obtain rest and relaxation and for individuals to benefit from the sea air. 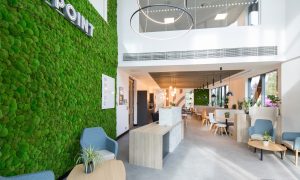 The natural world was celebrated during these times and there was much interest in gardening, with the cultivation of a vast array of plants and the creation of public botanical gardens. Nature and greenery were sought after and valued.

Supporting the development of a community

Fast forward to today’s commercial world and the act of creating a community in the office is to create a sense of belonging; of being part of something; working together and in support of each other; wanting to be a part of the whole. Biophilic design provides the canvas for this community.

As plants and all things green serve to enhance our feelings of connectivity and can offset the rigorous digital working practice that we are surrounded by, biophilic design enables the establishment of the community.

A feeling of wellness

Kellert talked about the ‘human-centred approach to design’ and the positive impact of biophilic design on our connections with each other and with place and nature.

A study by commercial flooring manufacturer, Interface, ‘The Global Impact of Biophilic Design in the Workplace’, found that workers in offices that contained natural elements such as greenery and sunshine are six per cent more likely to be productive and report a 15 per cent higher level of wellbeing. They are also 15 per cent more creative than other office workers. 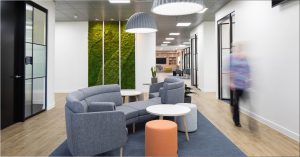 The wellbeing connection was also picked up through research conducted on behalf of the ‘Journal of Experimental Psychology: Applied’, which found that the presence of plants increases a buildings’ occupants feelings of wellbeing by as much as 40 per cent.

There is much talk of ‘neighbourhoods’ in office design at the moment.

Neighbourhoods commonly refer to the breakdown of office space into certain areas. Using the term ‘neighbourhoods’ denotes a more friendly, warmer and inclusive approach. Biophilic design plays a key role in this approach as, in the outer world, our neighbourhoods are broken up by parks and our streets are lined with trees. It makes sense to mimic this in an interior environment.

Renowned designer Oliver Heath talks about neighbourhoods in the guide he authored, ‘Creating Positive Spaces’, also commissioned by Interface. Heath points out that we are social – we like to be together and, although we can operate perfectly well independently, our need to be a part of a physical community still exists, as it was when it was first evidenced thousands of years ago.

Heath says: “From an evolutionary perspective, our survival instinct, inherited from our Hunter Gatherer forefathers, means we still feel more secure and happy, less stressed, and are more resilient when part of a community.”

He goes on to advise that, when creating these workplace neighbourhoods and communities, it is important that these spaces are positive. Not only will that have a positive impact on our wellbeing, it will also improve collaboration, making our integration far more effective. This, in turn, creates a stronger bond to the organisation which likely means bigger commitment and longevity of the relationship.

As digital creates physical distance, the office of the future needs to do all in its power to pull us back in and bring us together. Using biophilic influences can do exactly that.

In his design guide, Heath talks about physical proximity and how face-to-face encounters enrich relationships and bring down barriers. He identifies two emerging types of office design solution: Campus styles environments, favoured by tech companies like Google, Facebook and Samsung, with their open plan offices and outdoor areas, and cellular offices, designed to counter noise and lack of privacy.

It’s the campus style that supports what is known as a ‘collision’ design and there are stats to back that this works by creating more face to face interaction. This covers spontaneous meetings such as water cooler conversations and ad hoc ‘bumping into’ interactions in corridors. These offices promote the belief that proximity creates better collaboration.

If nature and natural elements are incorporated into the design work in these spaces, this can further fuel the collaborative, people-driven approach.

As established, nature, itself, provides a great connection, bringing us together and creating opportunities for us to interact. There are different manifestations of biophilic design from the physical – natural light, plants and living things; to the representative – pictures of nature, shells, sand etc; and creation of spaces that emulate the natural world in its complexity and integration.

If we consider these varied aspects in the early stages of planning an office design or refurbishment project, we can create a real sense of community. We can also mark out neighbourhoods and distinguish spaces using living walls, planters and water features instead of floor coverings and panelled dividers. This immediately allows for a more natural flow and encourages free movement.

According to mental health charity, Mind, bringing nature into everyday life is one sure way to boost both your physical and mental health, helping you to be more active, improving your mood and making you feel more calm and relaxed overall.

Standard bearer for the built environment BRE, states that 60 per cent of office staff don’t have enough access to sunlight so choosing offices with lots of natural light is going to be an easy win, in the very first instance, and should help with all biophilic elements. 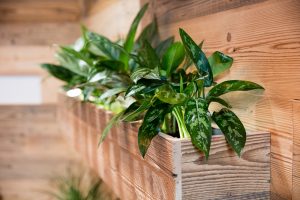 From the enhancement of natural light to the act of bringing the outdoors in, we can only benefit from a better connection with nature during the working day. The urban environment separates us from the natural world and positions a lot of us in an office for eight hours a day, removed from outside. When we do go out, to grab a sandwich or a coffee, it’s unlikely that we’ll see much green – particularly if we’re in a city centre environment.

Dr Gina Cavan, a senior lecturer in geography at Manchester Metropolitan University, is quoted in a recent article on biophilic design in workspaces by Manchester online guide, Confidentials as saying, “ vegetation such as trees, shrubs, grass and flowers are particularly important in cities because they provide us with many health and wellbeing benefits including increased life expectancy, reduced health inequality and improved psychological health and wellbeing. So recreating a sense of this indoors can be vitally important.”

There is also evidence that the presence of plants can act to combat potentially dangerous ingredients in a commercial environment. Business publisher, Raconteur, in an article outlining the benefits of biophilic design, references research carried out by Norway’s Agricultural University in Oslo, which indicates that plants remove harmful organic compounds, such as formaldehyde and benzene, that are found in the paint, carpets and furniture in the majority of commercial buildings.

Placing nature in the mix

So, how best to bring the green in, while boosting wellbeing, enhancing space and enabling better interaction?

Not all employers have the resources to ape the style of Amazon and add glass-domed greenhouses to their company headquarters. Living walls, plants and flowers are the top favourite choices for those who haven’t an abundance of space to play with. 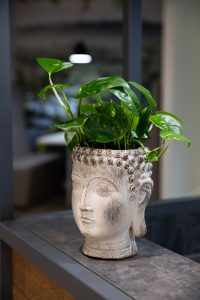 On the lowest rung, you can get the ball rolling by asking each individual employee to bring in their own desk plant. If you are supplying the plants, be as plentiful as possible and encourage staff to take responsibility for certain areas – let them own the plants and the space itself.

For those who have greater ambition (and budgets to match!), there are a whole host of big corporates, who have had the funds to pay for grand designs, to take inspiration from, all around the world. From CSG International and Adobe in Bangalore to Apple in California and Amazon in Seattle, there are no limits to what sensory celebrations are out there to feast on and admire.

Ultimately, there is potential for all office environments, regardless of size of floor space or funds, to embrace biophilia to some degree. Technology driven environments feel static; introducing living elements is an opportunity to remove that static quality and breathe life into the environment, putting us at one with nature – and with each other.

Why the office will never be the same again